My hobby, your hobby and gatekeeping... 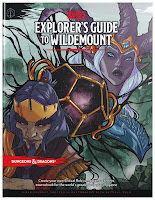 This post, or variants on it, are really getting old fast. But since the audience for this blog largely isn't intended to be the one for my wargames blog or podcast? here we go again.

The image on the right, and its associated product, seem to have stirred a wide range of reactions among the RPG hobby. If you've been living under a rock for the last while, it's a supplement for the Critical Role world.

I will unashamedly confess, I'm a #critter. Critical Role is largely responsible for reminding me what a fun hobby RPGs are, and in addition, for demonstrating that, for me at least, D&D 5E was well worth checking out. I'm also an old school DM with (until I got rid of it in the early 2000s) about 4 shelf feet of 1st and 2nd Edition books and scenarios, and a sprawling homebrew campaign that ran for a decade or more across four different parties including play by email (before a long break). Heck, in my day you didn't stream your D&D session: you wrote it up for Usenet (thank goodness my writing's improved since!). That makes those of us who posted our session-by-session write-ups to rec.games.frp.archives the Critical Role of the era. (Yes, this is a joke, get over it :D)

Look. Just stop it, ok? No-one's asking you to like it. No-one's making you buy it. It does not diminish the hobby. For goodness' sake, it's the top selling book on Amazon [Other retailers are available. Support your Friendly Local Gaming Store.] It's bringing people into the hobby.

What? It's not your hobby?

OK. Here's the thing. The hobby is bigger than you. And: trust me on this from experience with being chairman of a wargames club, and with some of my current players who started out as Critters... it does not matter in the slightest what brings people in to the hobby, be it CR, some old D&D setting WOTC haven't republished yet, OSR or whatever for RPGs, whether it's Bolt Action, Warhammer 40K or X-Wing for wargames... We have three new members at our club this week, who want to platy Warhammer Fantasy. Personally? It's not my bag. At all. But we're not going to turn them away! Enough people down the club play it they won't lack for opponents, and there's enough other games going on around them to capture their interest in other things. We have people who joined us three years ago to just play Warmachine who've since built English Civil War and WW2 armies...

If you think your bit of the hobby is better than what brought someone else in? Great. Prove it. Show them by your example. Introduce them to your passion.

But don't belittle theirs. Waving a knobbly stick and yelling 'Get off my lawn"? Really not a good look on you.
Posted by Mike Whitaker at 10:12